One afternoon, while reading books together as a group, one of the children handed an educator a book called, “Little Green Peas” written by Keith Baker and asked, “Can you read this one?”  The educator said, “Yes, of course.  Let’s see what it’s about.”  The group gathered around her as they read through the pages, learning about different colours and the objects associated with each of them.  As each one was talked about, the educator asked the children if anyone was wearing that particular colour.   Many of them raised their hands as they looked at their clothing, finding the corresponding colours.   The enjoyment that the educators saw in the children when discussing all of the colours, gave them the idea to experiment with putting white flowers in coloured water.  So a few days later, the experiment was set up and everyone gathered around the table, listening to the educator talk about what was going to happen.  Everyone was able to have a turn helping with a part of the activity, whether it was pouring food colouring into the cup or placing a flower into the water.  Once all of the flowers were placed, the educator placed them onto the counter, explaining that they would check on the progress after nap time.  Although, upon returning to the classroom from outdoor time, the children noticed that some of the flowers had already started taking on a new colour.   The flowers were pulled to the edge of the counter in order to get a closer look and the children could see what was happening.  Observations from individuals could be heard, “look it’s blue!”, “I like the purple one!”, and “I see red!”  The flowers were left in the water over the weekend and when everyone returned on Monday each flower had turned various shades of the water.  The group gathered around the table again and the children talked to each other about the new colours they were seeing and which one was their favourite.  The educator lifted the flowers out of the water to examine the stems and leaves that had taken on a new colour as well.  Everyone got a chance to smell their favourite flower and when asked what they were smelling, almost everyone said the colour of the flower.  To extend the experiment, some of the flowers were put into a different cup, to see if would take on another colour.  These flowers again were left overnight and when checked on the next day, only a little bit of the new colour could be seen on a couple of the flowers.   This activity had the whole group engaged, observing the process of the experiment, while making predictions of what might happen next.  All of the children were encouraged to share their ideas and thoughts throughout the process, allowing them to gain a sense of self-confidence and belonging.  After the experiment concluded, the group enjoyed listening to the educators read various books about colours and labeling all of the related objects. 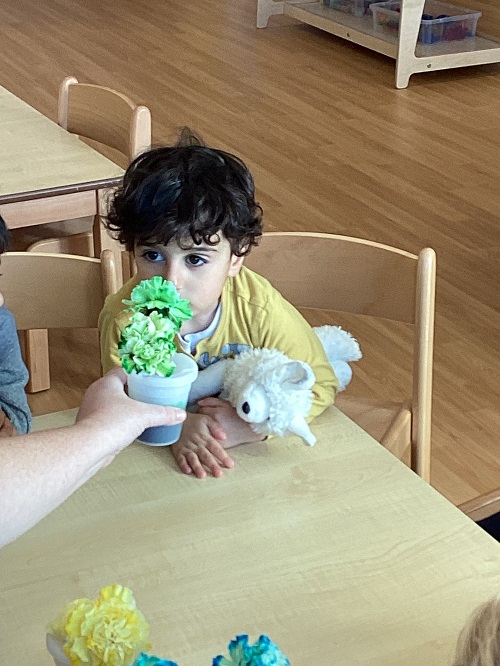 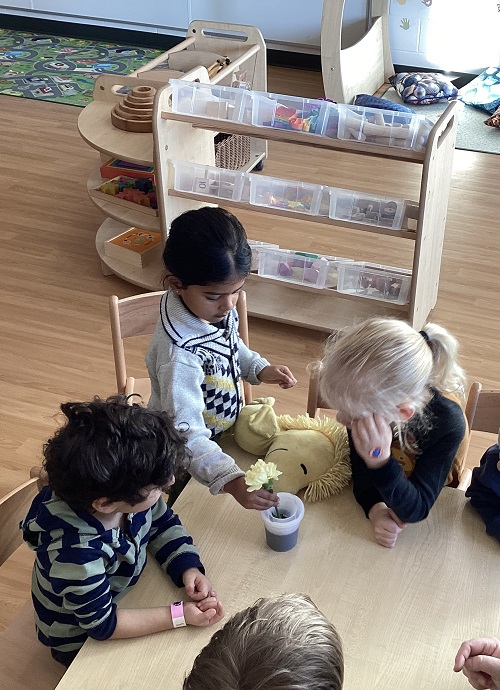 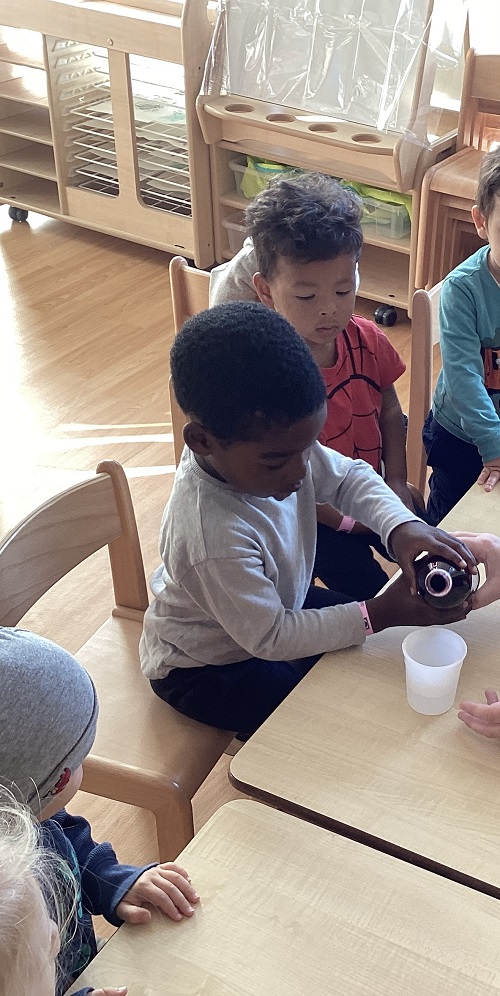