It has been said that walking barefoot may help improve the strength and flexibility of the muscles and ligaments of the foot, which in turn improves the overall function of the foot, reducing injuries, improving posture and balance of the body.

The school age group explored water they found on the back field with their bare feet. This led to participation in a scientific exploration and expanded their vocabulary with one another as they followed a path of water into the field. Elora communicated her observations about why the water became warmer over time and why the water was only going a certain way. “I think the further the water gets the longer it is in the sun, so it has more time to get warmer.” The school age educator thought this was a great opportunity to test Elora’s theory by taking a cold glass of water and placing it by the window in the sun. “When I come back tomorrow, I think the water will be warm,” Elora predicted. 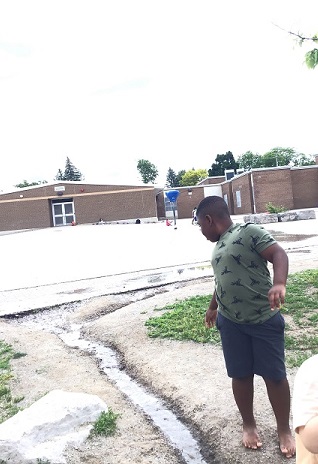 Forrest put a ball in one place of the playground and watching it move with no force added, just gravity. “The water is moving because it’s on a hill,” Forrest explained. Further, Caden noticed when the water reached the field it became mud because it mixed with the dirt.

We are continuously questioning, testing and investigating our own theories and strategies, seeking new ideas to facilitate the children’s exploration and understanding of the world around them in meaningful and natural ways. 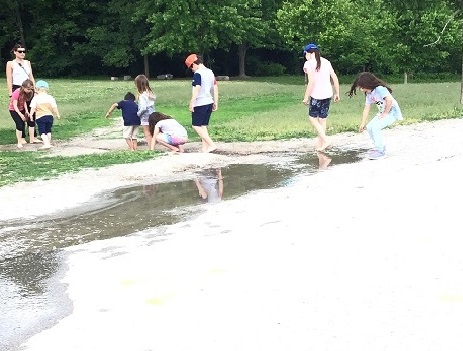 When children have had sufficient group experiences, the educators will often rotate the role of leader to a child who has demonstrated an interest in leading and in turn, the educator will participate by listening, observing and recording the experience. This promotes the child’s overall engagement, expression and sense of mastery as an individual.