Cause and Effect Experiment

The toddler 2 program at RisingOaks Early Learning l St. Brigid have been engaging in scientific discovery! To expand on a previous experiment using baking soda and vinegar to create lava lamps, we set up a new provocation using those same two ingredients.

The educators set up a craft mat on the floor and set out paper towels filled with baking soda, measuring cups, vinegar, food colouring and plastic bags. They then invited the children to gather around the craft mat. We started by filling up the measuring cups with food colouring and asked the question “What colour is this?” the children shouted out their guesses “Green”, “red” and “yellow”. Jacky then poured vinegar into the measuring cups. The children then each took turns pouring the vinegar mixture into the bags. Once the three bags were full Sandy asked the children “What do you think we need to add next?” one of the toddlers pointed to the paper towel. Jacky responded “Yes, the baking soda! What do you think will happen when we add the baking soda?” The children watched patiently as we quickly dropped in the paper towel and closed the bag. A child shouted, “Look bubbles!” Sandy asked “What is happening to the bag? Is it getting bigger?” the children watched the bag expand. For the next bag, we added more baking soda. It began to expand more, and for the third bag, Jacky asked “What do you think will happen if we add even more baking soda?” The children watched as bag expanded like a balloon. It eventually popped making a loud noise – almost like a balloon popping. The toddler children shouted “Again!”

This experiment fostered the children’s curiosity of cause and effect. It also supported their turn taking skills and colour recognition. 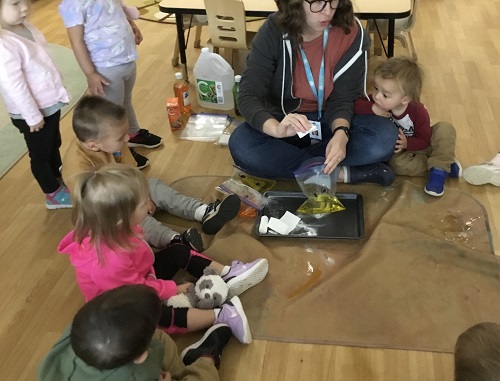 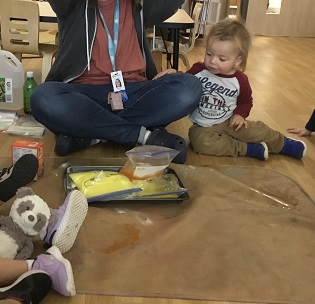 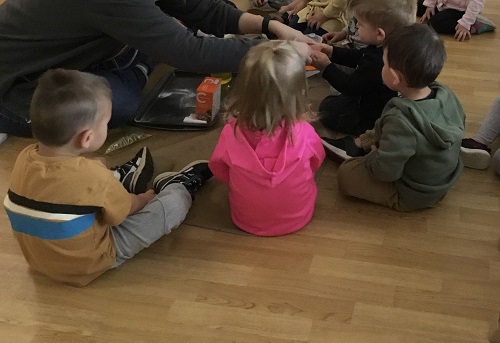