In Toddler 2 this month, we have been doing a lot of science experiments! One of them was an experiment called "Dancing Corn". We found a very large glass pickle jar and we added water and baking soda to it. The toddlers each took turns using a big wooden spoon to stir in the baking soda. We also added in some red food colouring. Next, we got the popcorn kernels out. The children all got a turn to feel and see the kernels before we added them into the jar. We enhanced the children's language development by using descriptive words such as smooth, tiny, yellow and kernel. Then it was time to add in the vinegar. We put the vinegar into small measuring cups and the children got a turn to add some vinegar to the water and kernel mixture. It took a few moments for the kernels to start to float up to the top, and then fall back down giving them a dancing effect. We noticed that little bubbles formed on the kernels, which made us wonder if that was how they floated to the top. Sandy wondered what would happen if we added more baking soda? She added a lot in and the water bubbled right out of the jar! It started to go all over the craft mat but Sandy quickly grabbed all four sides of the mat to contain the water. The children were so surprised at the explosion of water, some loved it but other friends were worried about the mess. This activity encouraged critical thinking, language development, and was a lot of fun! 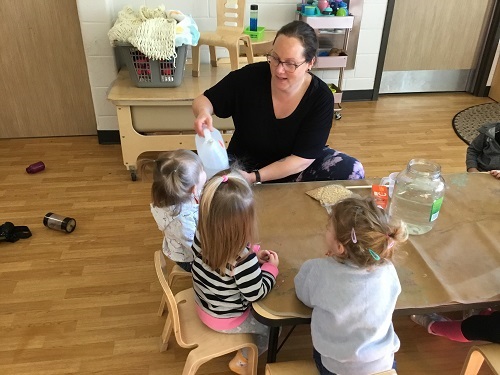 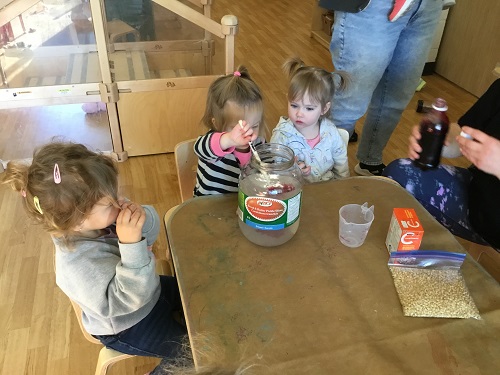