It's a Bird, It's a Plane, It's Super Canadian!

This month the children in emergency childcare had a fantastic opportunity to be a part of the RisingOaks Early learning Ontario fundraising team for KidsAbility. This Superhero fundraiser provided the children different experiences and activities to engage in and explore.

One afternoon educators Holly and Bonnie asked the children “If you could create the perfect superhero, what would they be like?” This opened up a variety of conversations as Easton asked “If there is Captain America, why don’t we have a captain to?” Thinking about that question Holly responded, “Well what would our own super hero be like?” With that Super Canadian was born.

Super Canadian, a name that was mashed together using both Jacob’s idea and Graces idea came together as a compromise for our hero’s name. When asked about their powers the children said that they should be inclusive, kind and they should have the ability to fly. “Especially flying, the bad guys can’t see him and he can shoot maple syrup at them, turn them sticky and then they stop,” said Audrey. Building off of what Audrey said Jacob added “They can have a "maplerang", like Batman’s batarang. It covers them in maple syrup and changes their attitude. If Super Canadian needs a getaway his "maplerang" doubles as a grappling hook to get out of there fast.” Addison, Grace, Jacob and Audrey worked on a back story and alter ego for our Canadian superhero. Super Canadian owns and works at their sugar bush as a maple syrup farmer.

Later in the day Addison and Jacob took the time to draw and illustrate what Super Canadian would look like. Jacob said, “The symbol should be a maple leaf.” Addison drew the cape which is a combination of both the pride flag to represent inclusivity and the Canadian flag to represent all Canadians. The superhero even has a little "maplerang" beside. To finish off their creative superhero the children worked together to make their Super Canadian out of melting beads. 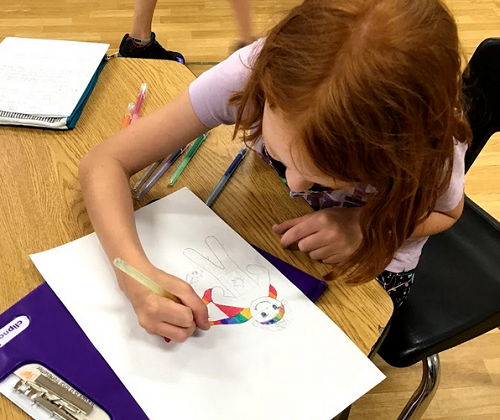 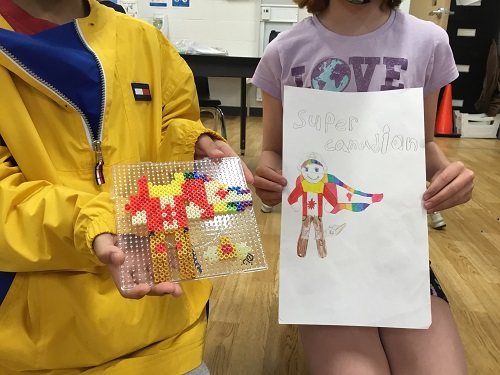