The Mining and Gem Collection Process

The school-age children at St. Brigid cooperatively explored a complex social dramatic play experience. They used both their verbal and non-verbal communication skills to keep this play evolving and growing. The longer their interest continued the more detailed the play became. It became a representation of the gem mining process and how the gems make the trek from the mine to the jewelry store.

This play interest started as the children were fascinated with how the colour absorbed into the snow and ice from the spray bottles. They noticed that it made the snow look like gems and treasure. They started to collect the coloured ice off the snow slides.

Ethan shoveled and collected ice chunks and pieces. Tristan and Maddox joined in and helped mine and collect the ice chunks. The ice was gathering quickly and needed to move. Ethan made a small slide down beside him. He started putting his mined ice down the slide. This cleared the mining space faster. Tristan and Maddox saw how this process was speeding things up and put their mined ice there too.

Tianna and Audrey had been spraying the food colouring bottles all over the snow hills. They saw the ice sliding down the slide and collecting in a pile. They were interested in becoming part of the play too and they asked how they could help.

Audrey mentioned, “We can make coloured gems”. She then sprayed the ice found at the bottom of the slide by the pretend mine. Tianna sprayed some too. This play also caught the attention of many of the other children. Different children helped create the jewels by spraying the ice with colour.

Since so many friends were interested in helping in the play it was necessary to find jobs to involve others in the play. Ethan was the miner initially but when the play and operation grew more ice was needed to colour. So Tristan and Maddox were added as additional miners. With the increased volume of gems mined a raw gem collector was needed. Lucas was busy with his shovel helping move the raw gems or ice over to the prepping area used. Audrey and Tianna were the gem colorists however the team grew quickly with the other children joining in.

With so many gem colorists Audrey decided that we now needed someone to take the gem creations to the jewelry store. This helped keep the space for the gem colouring clear and kept the operation running smoothly. Once Audrey delivered the finished coloured gem creations to the jewelry store I asked everyone who was going to be the gem seller. Ethan advised he wanted that job.

This play continued all week however we never got to the selling of the gems. They were engrossed in the process of mining, creating, and colouring the gems. Just as they had finished mining all the gems and coloured them the weather warmed up and the rain washed away all the gems. 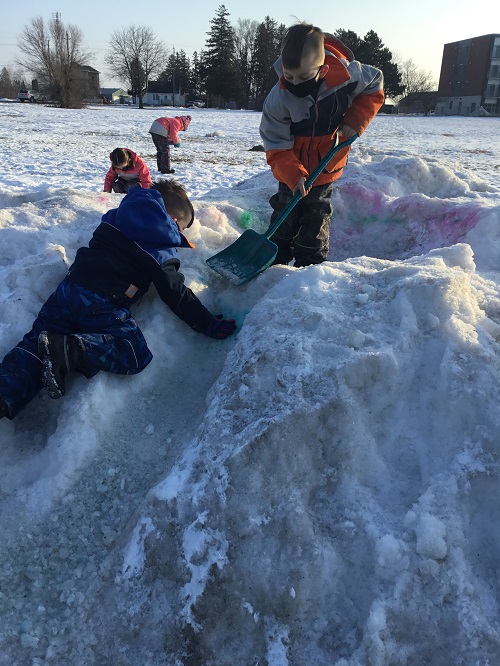 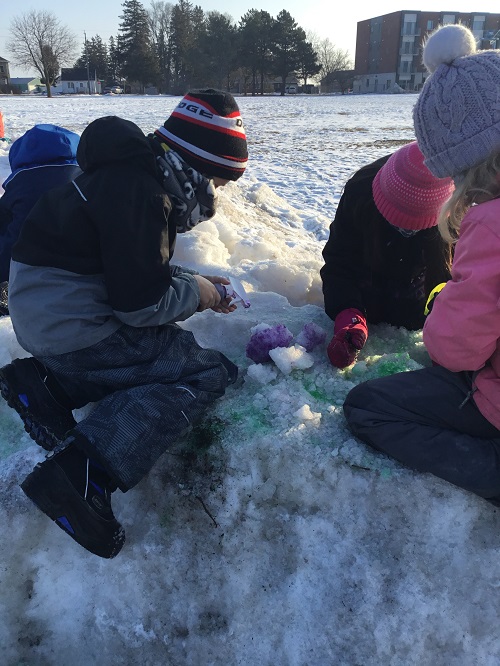 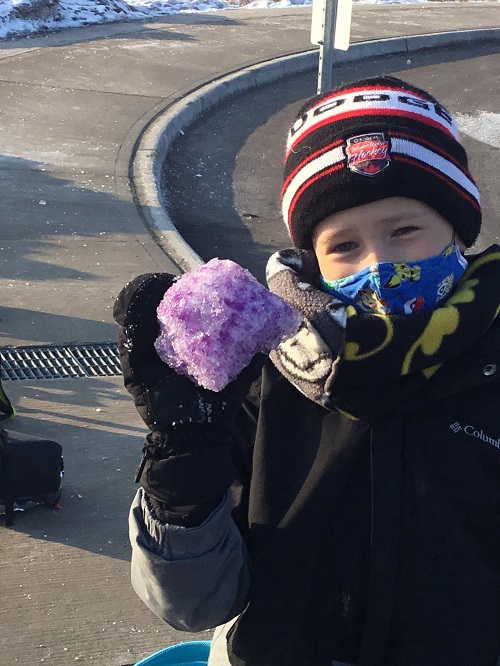