Welcome to the Preschool room! Come on in and meet our feeling monsters

This month we wanted to welcome all our new Preschool children into the room. The children have been getting used to their new routines, new peers, new toys and activities. They are also becoming familiar with The Zones of Regulation. In the preschool room we use these zones a lot throughout our day. In Zones of Regulation particular colours represent a feeling or emotion. Red for angry, blue for sad and green for happy.

One great way to build on and add onto the Zones of Regulation is a story called “The Colour Monster.” Ashley likes to read this story to the children and now the children request it to be read throughout the day. When she reads the book she also has puppets that go along with the story. The children are starting to remember the story and the different emotions the monster is going through as they yell out the emotion or colour as she pulls out the different monsters.

One morning Ashley and our resource consultant decided to bring the story to life by introducing classroom monsters to display in the room. Ashley drew four large monsters and provided the children with markers; blue, red, yellow and green to colour the monster. The children were drawn to this activity and asked if they could colour on the monsters. Bora ran to the angry monster to help his peers colour it red and he said, “Ashley look he is so angry.” Then a little while later Bora decided to colour the sad monster. Bora said, “Ashley, he is sad because someone took his toy.” Jacob walked around the different tables and looked at each monster. He shared “The Angry monster was angry because he kept spinning and spinning and then fell down. The sad monster is sad because he is cold. The yellow monster is happy because he has a toy to play with.” The children took turns coloring the angry, sad, happy and calm monsters. When the children were finished colouring in the monsters Ashley hung them on the wall throughout the room.

Later that day Ashley read the colour monster book to the children. After reading the book Ashley asked them if they remembered colouring something in the morning. The kids all yelled “Coloured Monster!” She then took them around the room introducing each monster. They then talked about how each monster is feeling and had the children demonstrate how they would express that emotion. The children were really excited to see the monsters up on the wall. She then told the children that if they are feeling angry or sad or happy that they could run over to the monster and tell the monster and show them how they are feeling and why.

At one point in the day James was building a tower and it fell over. He stood up and said, “I’m so angry, my tower broke. I angry like red monster!” and then pointed at the red monster. Ashley bent down and talked to James about how that would make her angry too and acknowledged how hard he worked on his tower. Ashley encouraged him to try building it again. Logan then came over and said. “I help.” This made James smile and the two continued to build towers and laughed as they fell over. It was great seeing how James was able to connect his feeling to the situation and then express himself.

Having the colour monsters up around the room will help the children to continue to label emotions, create conversations amongst educators and peers and help work alongside the Zones of Regulation. Getting children to recognize their own emotions and their peer’s emotions help them build empathy, compassion and understanding on how their actions effect themselves and others. 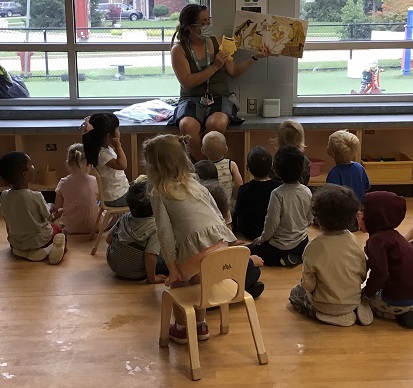 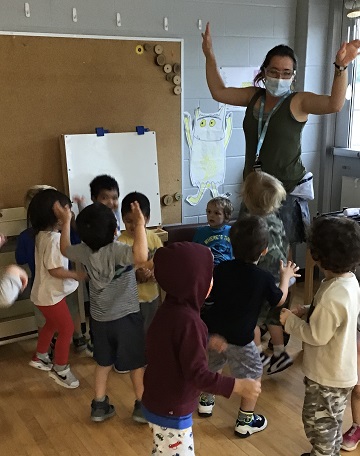