Chicka Chicka Boom Boom, We are Learning Through Play in Preschool 2!

The children in Preschool 2 have been demonstrating consistent enjoyment of literacy in the classroom through various books and songs. One particular story that they have shown a strong interest in over the last few weeks is a book called Chicka Chicka Boom Boom by Bill Martin Jr. and John Archambault. The story consists of lowercase alphabet letters racing to the top of a coconut tree, but when the tree gets too full, they all fall out! The uppercase letters, which the story refers to as the “mamas and papas”, rush to help the lowercase letters. The children enjoy exploring the story through a hard copy of the book, as well as by listening to the upbeat song version. We noticed that the children often request this book at group reading times, and have also observed them singing and reciting the story throughout many areas of their play. One day, James was jumping from a wooden stump outside, and said “I’m falling from the coconut tree!” as he landed on the ground below.

We have started to expand on our observations of the children’s interest in this story, by adding a coconut tree to our classroom environment for the children to interact with. We used window markers to create the coconut tree on our whiteboard, and then added colourful magnetic alphabet letters for the children to play with. We have observed many creative and meaningful learning opportunities unfold as the children incorporate the tree and letters into their play. Many developmental domains have been fostered through this extension of learning, such as communication, language, literacy, emotional, social, and cognition.

The children have enhanced endless skills within these domains such as letter recognition, phonological awareness, retelling stories, vocabulary, identity formation, problem solving, representation through pretend play, questioning, observing, reflecting, reaching conclusions, classifying, seriating, counting, and so much more. Many children recited and acted out the story by walking the letters up the tree, while adding in their own storylines, events, and ideas along the way. “He’s so tired!” Myles explained, referring to the red letter M that he was slowly moving up the trunk of the tree. Dirk carefully placed many letters on the tree, and then knocked them all down! “Down” he said as he laughed. Many children also used the book as a resource during their play, referring to it as they explored with the tree and letters. Some children matched the magnets to the letters of the book and on the board. Others worked to match uppercase and lowercase letters together. “This is the baby” said Andi as she held up a lowercase O. “I have three letters for me” said Benny as he began collecting many letter B’s from the pile. “I found two D’s!” shouted Sophie with pride. Naya spelled her name out on the board, discussing the names and colours of the letters. “The Y is yellow like this one” she said as she pointed to a yellow A on the board. James found two letter J’s and transported them over to his check in photo on the wall. He placed the two J’s beside the photo of himself and eagerly showed his friends. “I have two J’s for me!” he said with excitement. This inspired many other children to place letters beside their photos. Later in the day, Naya drew a coconut tree at the art table, and built her writing skills as she practiced constructing the letters of her name alongside her tree. “I want to do Natalia’s and Violet’s letters now” she said when she was finished with her own name.

We as educators have learned so much through observing and interacting with the children during this book extension. We are excited about continuing to build upon the emerging skills among the preschoolers as we work together to discover additional ways to foster the children’s pleasure of Chicka Chicka Boom Boom and positive attitudes towards learning through play.

“When reading is experienced with enjoyment, learning is reinforced and children are motivated to continue to expand their involvement in literacy” (ELECT, A Framework for Ontario Childhood Settings, Page 43). 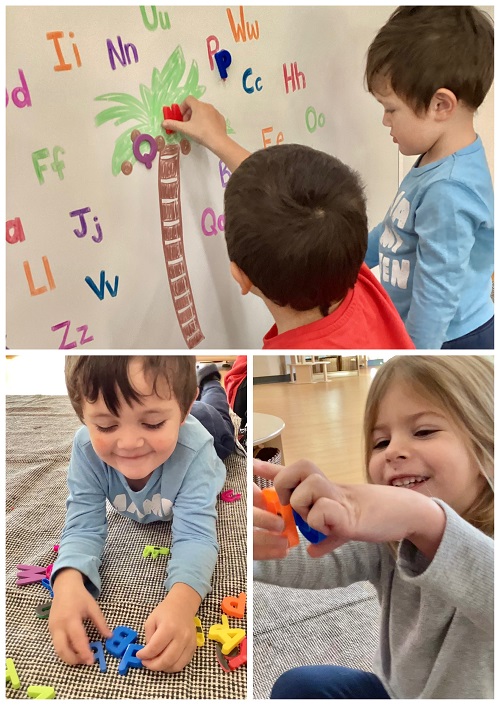 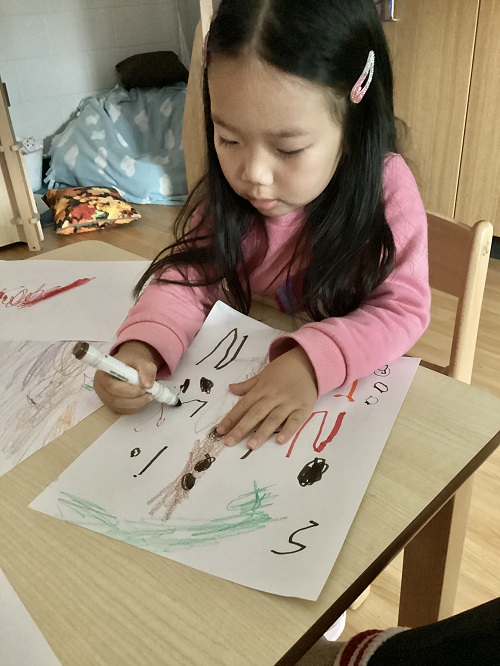